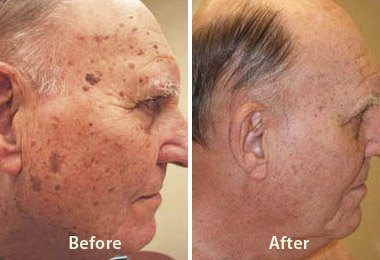 Moles, bumps, and beauty marks—oh my! Bumps and lumps are sometimes just bumps and lumps, which is good news for you. Even though you may not prefer to see them budding off your face or body, benign lesions cause no worry for skin cancer. As the name suggests, benign lesions are benign and non-cancerous growths that tend to stick out on our faces and bodies. Let’s dig into some specifics, shall we?

Holy moley—what’s that growth I see? Well, it might just be a mole. Moles are common benign lesions that result from a local cluster of pigmented cells called melanocytes. Black and brown moles, for instance, contain the pigment melanin, which they owe their signature color to.

As you may know, moles can appear at birth—or come about later as we age. They can result from our genetic heritage, with family members sharing mole pigmentation and patterns. They can also proliferate due to sun exposure and immune status. Moles are common lesions among the population; almost everyone has at least one somewhere!

Ever been bothered by a piece of skin that seems to catch on things? It could be a skin tag, which usually forms around areas of the body that experience high periods of friction. Areas prone to friction include under the arms, in leg folds, around the neck, under breasts, and even under eyelids.

The exact reason behind skin tags remains somewhat clouded in mystery. Some research has pointed to a genetic connection, and it could be the result of a resistance to insulin. Other studies have suggested a link between skin tags and human papillomavirus. Skin tags also have a thing for accompanying pregnancy as well as affecting adults over the age of 50.

As mentioned, skin tags hang loose, which causes clothes or jewelry to catch or hook on the fold. Irritation, and even pain, are likely outcomes. Skin tags may usher in another point of irritation: skin tag removal may be an ongoing process, as new ones have been known to appear.

Similar to most moles, genetics also rest at the root of seborrheic keratoses, a wart-like skin lesion. These growths owe their development to familial lineage, and grow in number and prominence with age. They can appear on almost any part of the body: on the face, scalp, torso, arms, and legs. They can vary in appearance, by color and texture. Seborrheic keratoses sport a range of hues, including pink, brown, gray, and white. Some are wart-like in texture, while others appear smooth and shiny. Like skin tags, seborrheic keratoses tend to continue to pop up and may even recur in the same spots.

Sunspots, also known as age spots, are skin lesions that look like brown patches on the body. Due to hue, sunspots can stick out in more visible places, including on the hands, arms, and face. The name gives away their origins: exposure to the sun. Sunspots start developing around age 40 for most people, although they can appear earlier or later in life as well.

How to Remove Unsightly Skin Conditions

Skin lesion removal is not as daunting a process as you might have thought. While most insurance covers removal in cases of burning or irritation, lesion removal can prove quite affordable for solely cosmetic reasons as well. For instance, skin tag removal starts at just $100 per tag.

If you’re looking to remove benign skin lesions, Cahaba Dermatology offers a variety of inexpensive treatment options suited to your skin situation. Unsightly skin lesions don’t have to be a bother any longer. Schedule an appointment with us in Birmingham, AL to resolve any issues regarding benign skin lesions.